Hours of operation:By appointment - phone Bonita and during the dinner hour for theatre shows see rosebudtheatre.com.

New! We have upgraded and reset our settler room so it more faithfully reflects artifacts and stories from the 1920s and 1930s.

Located right across from Rosebud Theatre, we welcome you to a journey through the past.

Established by members of the Rosebud Lions in 1967, Rosebud Centennial & District Museum highlights the settler and ranching history of the Rosebud, Redland and Beynon area. Blackfoot, Cree Metis, ranchers, cowboys, coal miners and settlers were drawn to this beautiful valley.

One often admired feature is an extraordinary collection of antique tools, which were gathered over a lifetime by the late B.D. "Dude" Cote of Strathmore. Mr. Cote collected from neighbours, attended auction sales and spent many hours to bring his tools into "next to new"condition.

The Museum also features a self-guided walking tour of 12 signs around Rosebud. See brochure available inside the museum. 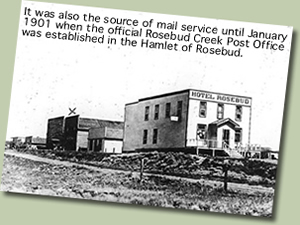 Originally, In the 1920´s and 30's the museum building was a Mah Joe´s Laundry, a places where the single men (working for coal mines and the railway), hung out and played cards waiting for their laundry. Later, it was a farm implement and bulk oil dealership and then a coffee shop. The building sat empty and falling into disrepair when the Rosebud Lions Club decided to fix it up and open a museum. The official opening was held in 1967 with then Lieutenant Governor, Grant MacEwan, in attendance. He later wrote a brief biography of our very own Wild Horse Jack Morton.

Most of the original artifacts were collected from local farms and residences. In 1979 the operation of the Museum was taken over by the Rosebud Historical Society. Much of our success can be attributed to Shirley and Rial Barr who spent many hours refurbishing and cataloging the artifacts. Deen Hymas also played a major role in the Museum´s successful operation. George and Jewel Comstock and family were faithful in keeping the museum operational from 1983-2018. 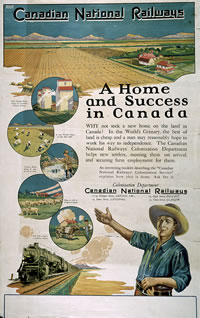 Long before the first ranchers and settlers arrived the Blackfoot found this valley a good place for hunting camps, they drove buffalo off a jump and preserved meet in camps along the Rosebud Creek near Lenglet Siding.

The first settlers arrived in the Rosebud area in 1885. However Rosebud counts its establishment from 1883 from a group French wine merchants who saw the opportunities of the abundant grass and shelter for producing cheap horses and beef for war efforts on the continent and abroad.

In 1883, the closest business center was Gleichen, some 30 miles distant, as that was where the Canadian Pacific Railway had paused. So most settlers traveled there for groceries, supplies and very importantly, mail service. 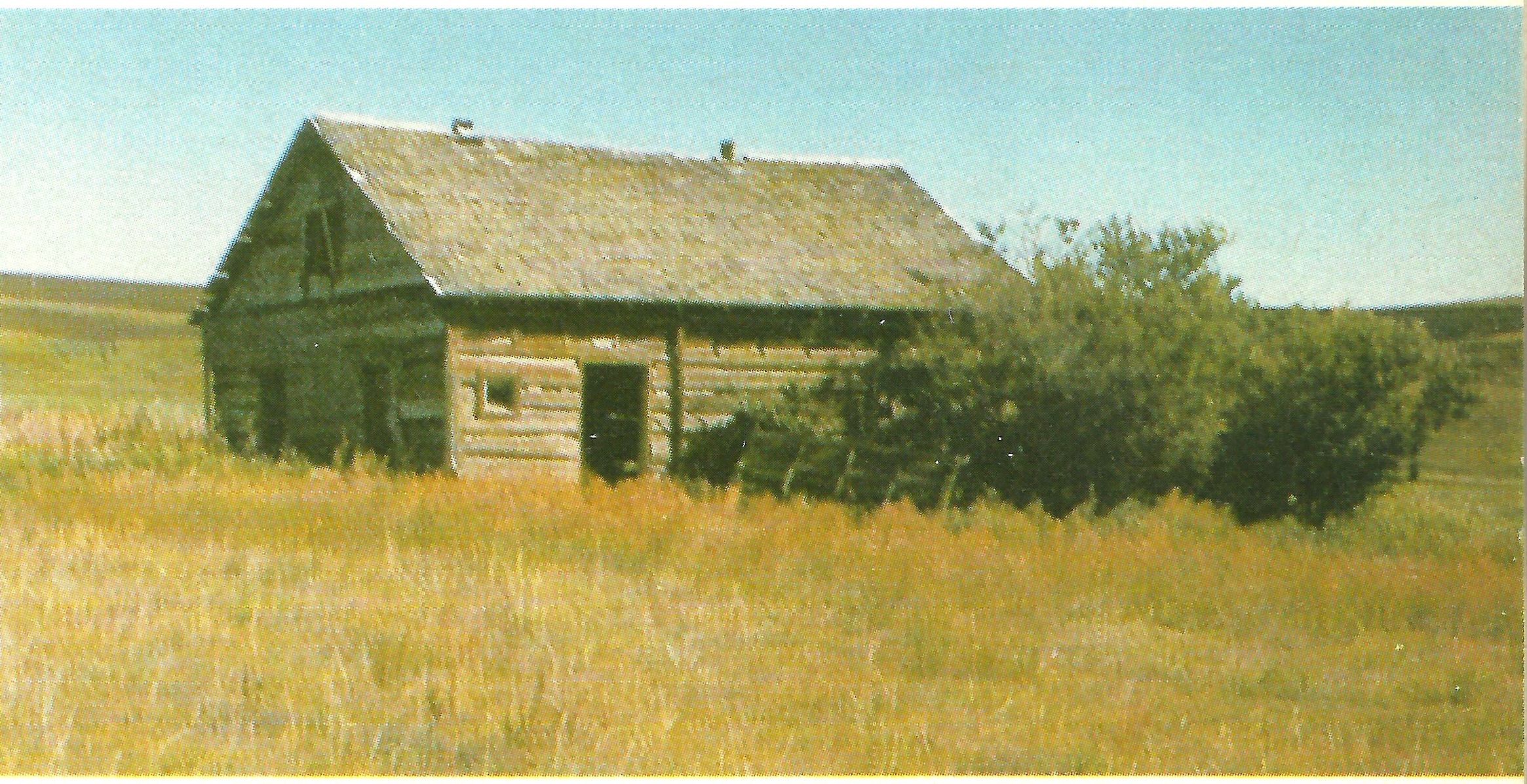 Then in January 1901, the official Rosebud Creek Post Office was established in the what would become Rosebud. Mail was delivered by horse every two weeks to Rosebud Creek until the Canadian National Railway began rail service in 1914 and then daily mail service was provided. In 1922, it officially became the Rosebud Post Office. 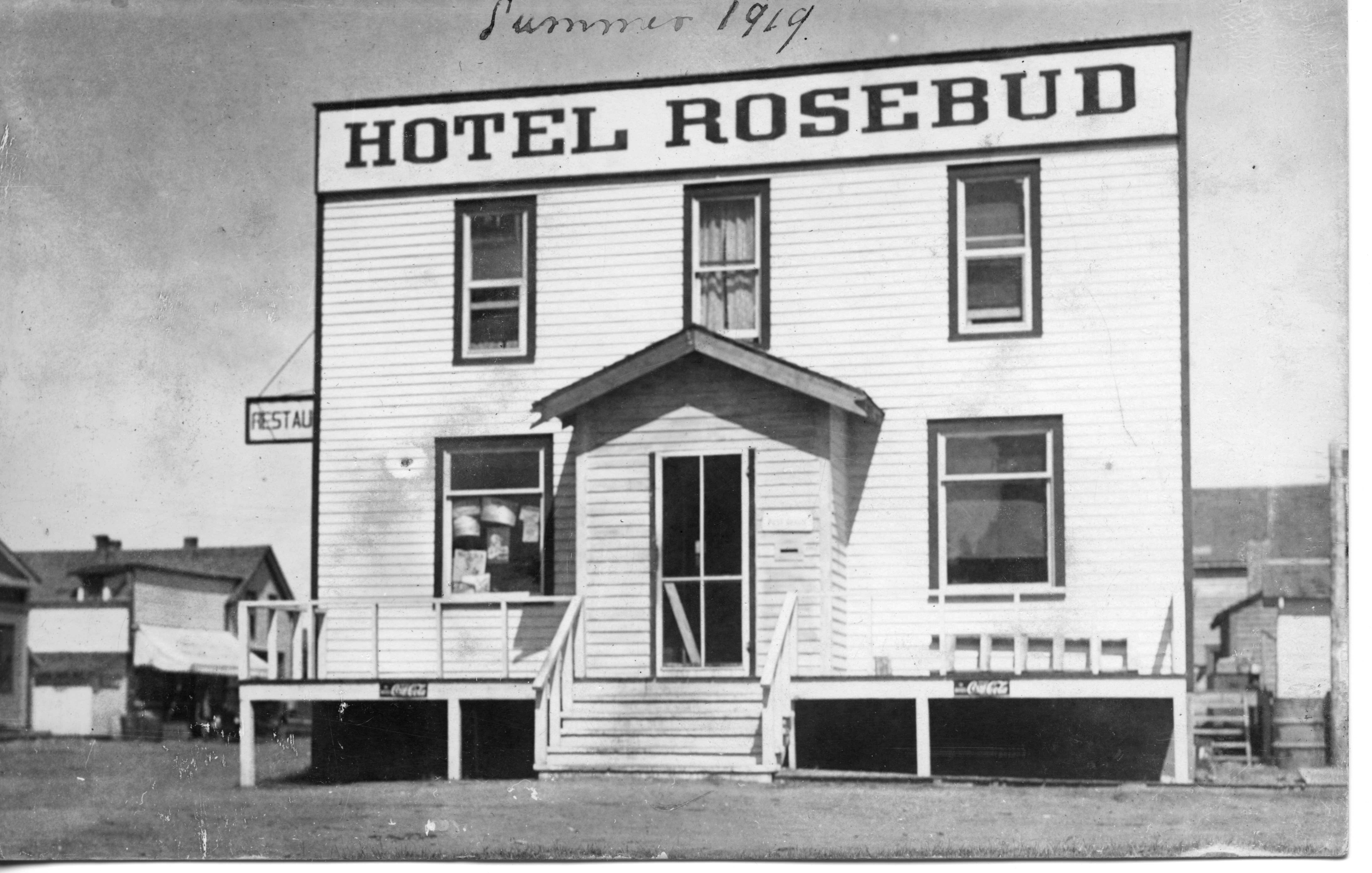 The village started to flourish after the First World War with the coming of the CN Railroad and the many coal mines along its route down the river. Many businesses prospered. The hotel, store, lumber yard, Chinese café and laundry, a dance hall, pool hall, blacksmith shop, drugstore, bank along with dray (hauling by heavy horse) and livery business. 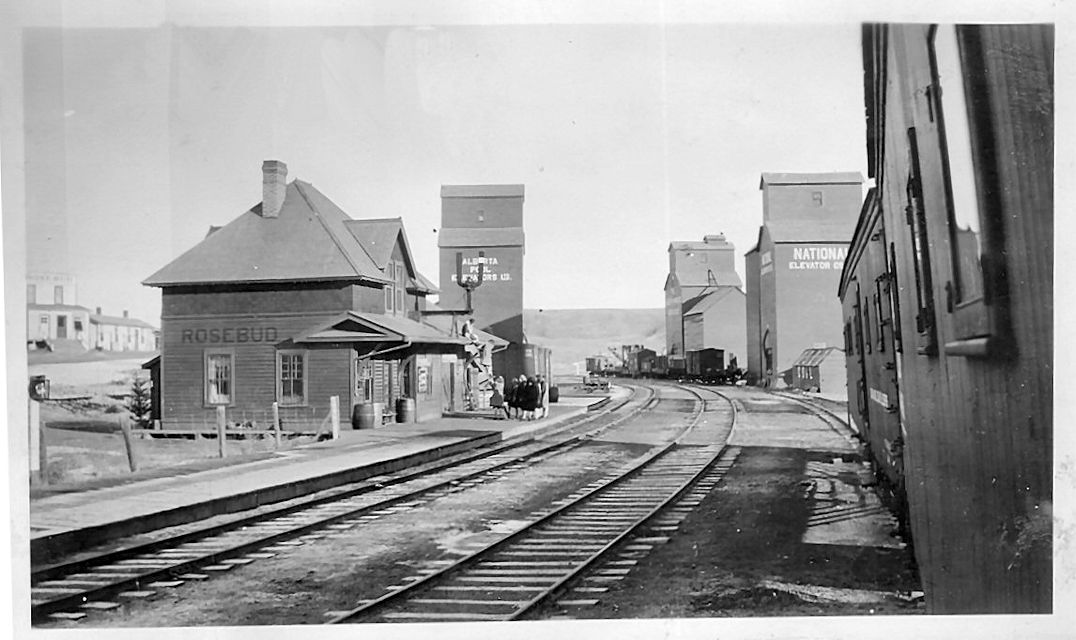 National Grain built an elevator in 1913 and two more companies built elevators in 1917 to accommodate the influx of settlers who were breaking up the prairie sod and planting grains.

The 1920s were the boom years for Rosebud. Like the rest of the prairies, farmers were hard hit by the drought of the 1930s. Banks called in loans or tried to. 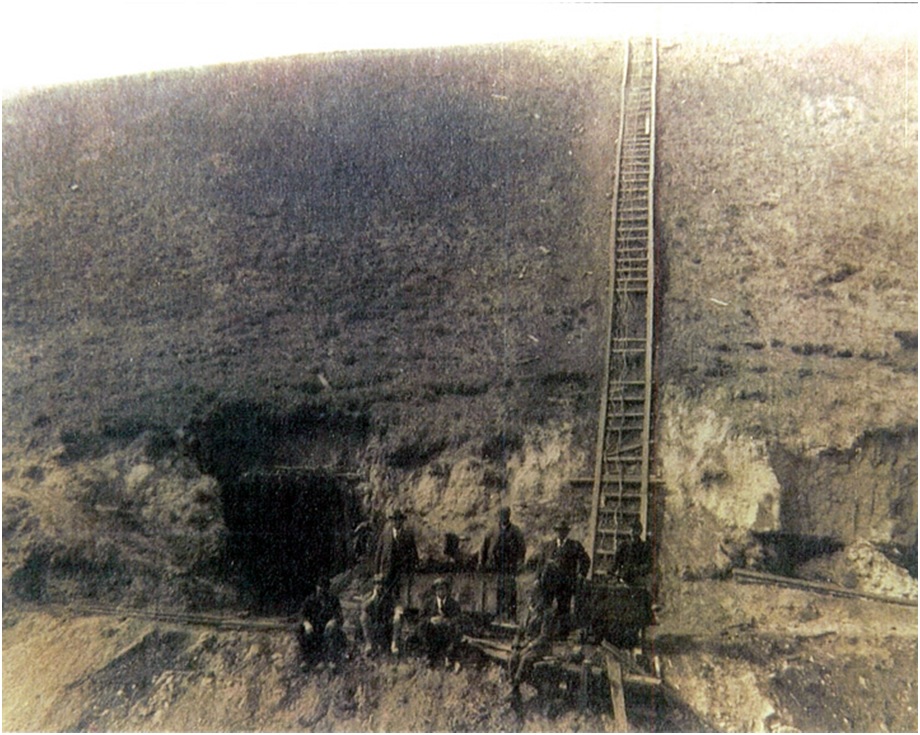 The soft coal of the immediate region produced too many sparks (and grass fires) so that boom went bust when the Federal government legislated only hard coal for trains. Yet Rosebud continued to be the business center for the rural farming and ranching community until the early 1970s when most of the businesses shut down as a result of the local school being combined with nearby Standard School. 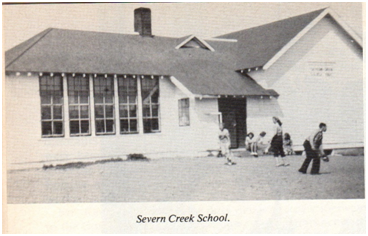 The Severn Creek School in Rosebud began in 1903, operating in various venues from one room school house SE of the village, to the Hotel basement to a second and third version on its present spot and operated for 68 years until it was closed on June 29, 1971. Shortly thereafter it was renovated and resurrected as the second Rosebud Memorial Hall by the Rosebud Lions. For a short time, the hall even had a recreational director to make sure the community children had plenty of activities.

In 1973, Crescent Heights Baptist Church in Calgary purchased the Rosebud Mercantile Building as part of a camping outreach program called Rosebud Camp of the Arts. Later this property became part of the Rosebud School of the Arts (est. 1976 as Rosebud Centre of the Arts)and Rosebud Theatre (est. 1983 as Rosebud Historical Dinner Theatre). In 1976, members of the supporting community purchased the Rosebud Hotel and transformed it into a dormitory for students and living quarters for staff. In 1977 a residential high school was started (with 6 students growing to a peak of 40 students in grades 10-12). Small class sizes and community culture that grew to have a strong emphasis on fine arts. By 1983 most of the staff had young families and more year round income needed to be generated. The first outdoor dinner and theatre was presented that year. "Comedia D'Arte" production was staged in the rustic backyard of the Mercantile on an outdoor stage and bleacher-like stands. The school cook, Mrs. Gladys Dahlen taook reservations on the kitchen phone while she did up the meal.

In the mid and late 1700s, maps of Northa America published by the Arrowsmith Brothers included Edgecoal Creek describing "great quantity of coal in this creek". The railway line first established by Canadian Northern Railway (later to become part of CN Railway) was lured by the promise of abundant fuel and built along the Rosebud Creek. Later this soft coal was found to be too soft to be safely burnt so the small coal mines went bust although there was harder coal still mined where the river joined the Red Deer.

By the 1880s the buffalo had been exterminated, leaving the native people starving and destitute. Many of the Blackfoot had been forced by Treaty #7 in 1877 to move to the reservation south of Gleichen which is now called Siksika. 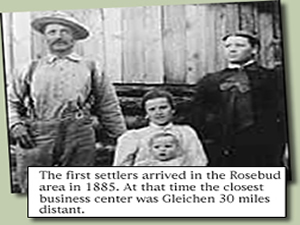 The first settler in the area was James Wishart, his wife Eliza, three sons and three daughters camped along the Rosebud Creek for a few a days on their Montana (fleeing aftermath of the Metis uprising at Red River, Manitoba). As told in “The Rosebud Trail” by John J. Martin, Jim awakened early one morning ready to continue the trip to Montana … the rising sun shone down the valley upon thousands of budding wild roses: among the sparkling dewdrops the wild honey bees were gathering nectar. To Jim the scene was beautiful, the best he had ever seen and turning to his wife Eliza who was building a campfire, he said “this is too good to leave, here is the promised land; we go no further!”

A group of horse and cattle ranchers from France moved into the area for a time. José Antonio Sala, an old wine merchant wanted to homestead but his family insisted the younger members should brave the cold winters and that was how his daughter, Carmen met the notorious cowboy, Jack Morton. His legend of generousity and larger than life exploits permeates the history of this area.

Many of the settlers endured severe hardship after moving to their homesteads. They were not prepared for the bitter cold and heavy snow of our Alberta winters. There are stories of women who arrived from the old country with their fancy clothes, fine china, and an expensive piano and yet forced to spend their first Canadian winter in a tent.

John Martin writes, “some settlers were forced to give up living in the wilds: they could not stand the prairie loneliness, blizzards, illness and at times even hunger. Also recurring prairie fires burnt many of them out before they got themselves well located and protected. In some cases they had been ill-advised as to the many hazards they would have to face. Some sold their homesteads for as little as $500.00 while others just pulled up stakes and left for civilization, leaving everything behind. Many of the first homes were made of sod with earthen floors. Those settlers fortunate enough to be near a stand of trees built the luxury of a log house.

Between the 1880s and the intrusion of the sod busters, many large ranches had been established with hundreds of thousands of cattle being brought in to feed off the abundance of grass. Some of these farmers felt that if the Buffalo could survive the winter without extra feed, so could cattle. Many ranchers did not bother to put up winter feed. During exceptionally severe winters of 1886 and 1906 thousands of cattle died of hunger and severe cold. The blizzards of 1906 saw cattle run with the wind and pile up in coulees and ravines and there they suffocated or froze to death..

The Pioneers who settled the Rosebud area came from many different cultural and ethnic backgrounds, in contrast to some of our neighboring communities that settled in ethnic groups. For example, Standard and Dalum were predominately of Danish extraction, many Rockyford were of French background and Carbon pioneers were of German origin.

James Wishart, Rosebud's first settler, came with his parents from the Orkney Islands near Scotland, married Eliza, a Metis woman and spent much of his life in Manitoba before emigrating to Alberta. The story of this family is contained in a book sold by the museum. 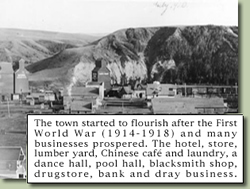 Many of the early ranchers came up from the United States with large herds and brought an end to large ranching operations. The National Grain Company built a grain elevator in 1913 and the first wheat was delivered in 1914. One of the best stories concerned this elevator.

"It seems that in 1914 several farmers delivering grain were concerned that they were not getting the proper weight for their wheat. Sometimes the scale weighed light, sometimes heavy, and other times quite accurate. An investigation revealed that two chickens had made their home under the scale where food was plentiful and they roosted on the scale beams, but never in the same place, thus causing the scale to give false readings"

No doubt these two chickens were quickly escorted to the chicken coop (or soup?). 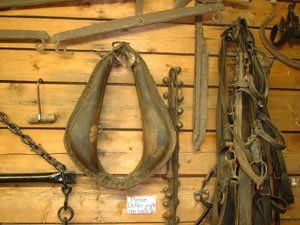 Although the boom days of Rosebud are gone, many of the tools and appliances from the pioneer days still exist. Even though the places pioneers and ranchers came from had many advantages coming from the industrial revolution, on the prairie they needed horse and oxen power. The blacksmith was a valued and intergral part of any community. Everyone had to make use of some kind of livestock pulled vehicle to get anywhere. Most tools required a lot of elbow grease and we cannot underestimat the amount of work needed just to chop wood or haul coal to operate any kind of heating device. 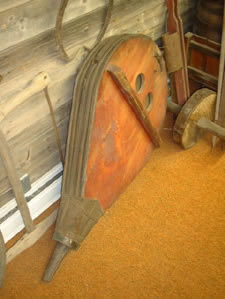 © Copyright © All rights reserved | This template is made with by Colorlib